I've seen quite a few "conservatives"  arguing that anyone promoting Second Amendment sanctuaries is a hypocrite if they opposed Sanctuary Cities by the left concerning immigration.  Trying to square that circle so I delved back into my thoughts on the matter.  Here's what I came up with.

I think it's important to distinguish between three separate actions.

1. Refusing to assist the federal government with local resources

I might be OK with 2 but at some point it bleeds into 1.  What if the federal government asks to be notified when an illegal alien with a criminal record (but I repeat myself since they all, by definition, are criminals but I digress.  Let's focus on some random MS-13 gang member.) is arrested so that they can pick him up for deportation and/or prosecution?  Maybe that notification falls under action 1 but since most government bureaucrats have time on their hands, making that phone call might be 1 or it might be 2.  Preventing federal officials from entering secure areas of a state building for law enforcement purposes?  I guess I don't really have any problems with that.  It is a state building, not a federal building.

I'm pretty sure I oppose 3 unless you are willing to pay the consequences.  The judge who snuck a convicted felon out the back door of her court room to keep INS from grabbing him as he came out the front is an example.  She may have been morally correct (although my reading of the case at the time suggested otherwise) but she must then suffer the consequences of her actions.  Prohibiting INS officials from raiding a business when they have evidence of criminal wrongdoing?  I'm no lawyer but I don't think you can do that.  I'd assume they'd need a proper warrant.

So now that I've delved a little, I'm no more clear on where I stand.

Another related topic that comes into play then is whether the states can then enforce federal law in the absence of a willingness by the feds to do so.  Arizona ran into this during the Obama administration when federal law enforcement refused to enforce immigration law, so they directed their law enforcement to do so.

I guess I'm going to have to give this more thought.  Odd how complicated moral decisions can be more nuanced than originally thought.

Posted by heresolong at 6:02 AM 0 comments

Email ThisBlogThis!Share to TwitterShare to FacebookShare to Pinterest
Labels: sanctuary

Liberated: A definition and a few observations 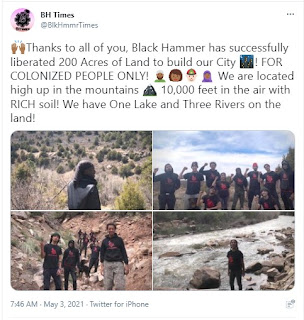 Observation 1: If you raised money and bought land, you didn't really liberate it, you participated in the system

Observation 2: If you bought land at 10,000 feet it probably doesn't have rich soil

Observation 3: You don't give off the vibe of a bunch of farmers so how exactly are you going to support yourselves other than by begging for money on the internet and buying food from the same oppressors from whom you bought the land?

Observation 4: Looking at the pictures, WTH?  Do you seriously think you can go off grid there?  Might want to watch a few youtube videos by people who are homesteading and living off/mostly off grid before you head off into the wild blue yonder.  Seriously, there are lots of them but since they are mostly white people I suppose you felt you had nothing to learn from them.

Observation 5: Did you get a post office box so that your welfare checks can continue to be delivered or do you just go with direct deposit?  Hopefully you have found a bank that has decolonized its mind to do business with.

Wrap up: Maybe when you start to struggle (read: die off in winter) the locals, who you will probably have annoyed by referring to them as occupiers and colonizers every chance you got, will step up and bring you down the mountain so you can go back to whatever colonized city you came from.  Maybe then you will have learned something. But I doubt it.  You don't seem like the type to learn.  Instead I suspect that you will double down on your hatred by finding ways to blame the "man" for your failure.  A few thoughts to help you get started:

A decolonized education system would have taught you the skills needed to subsistence farm at 10,000 feet (hint: there aren't any).

A decolonized assistance system would have provided everything you needed to survive on a 10,000 foot piece of desert without having to farm.

A decolonized country would not have forced you to liberate a piece of high desert and post all over the internet about your great victory, thus leading you to look like idiots in front of the whole internet.

That last one may have been snark.

Posted by heresolong at 5:58 AM 0 comments

Email ThisBlogThis!Share to TwitterShare to FacebookShare to Pinterest
Labels: liberation

Face eating monkeys on the loose?

I would also point out that after extensive search, we still haven't found any monkeys loose in my town, either.

Worrisome, to say the least.

Also, is it racist to call them monkeys?

Posted by heresolong at 6:30 AM 2 comments

Email ThisBlogThis!Share to TwitterShare to FacebookShare to Pinterest
Labels: food for thought, monkeys

I use a VPN.  Recently had some trouble with outgoing email which seems to have been resolved but that got me down a rabbit hole on speed testing.  Did a few comparisons.

VPN (which shall not be named, through US server) using Open VPN protocol

Same VPN, same server, using Wireguard, which some sites claim is faster, and some claim is slower.

Interestingly I got different results with Wireguard coming in at about half speed a few minutes ago, before I decided to write this post.  Either way, however, not sure that I am thrilled with these speeds and may do some exploring.

Other issue is that they were verified No Log, but seem to have been bought out by another company which has a bit of a sketchy reputation.

Posted by heresolong at 8:00 AM 0 comments

Oops I did it again!

But since everybody loves waffles, I bought another one.  Search for "waffle" or "waffle iron" in the blog for history of "The Collection".  Meanwhile, here's a Sunbeam Model B from the late 20s/early 30s.  At least according to what I've been able to track down, which isn't much.  I'm mostly going off of a patent issued in 1929 that is stamped on the unit.

Posted by heresolong at 3:04 PM 3 comments

Email ThisBlogThis!Share to TwitterShare to FacebookShare to Pinterest
Labels: everybody loves waffles (and toast?), the collection, waffleposts

Well this is awkward

From the United States Air Force materials on Combating Extremism in the Air Force: 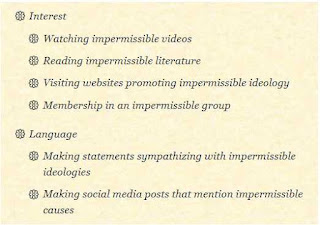 Seems like branches of the government may be confused about that whole pesky 1st Amendment thing.  Yes, you give up some of your rights when you sign up with the military, but pretty sure you don't give up all of them, possibly including reading books on your off time or talking about "impermissible" ideologies.

On the other hand, if we are going to go this direction, I assume our current overlords will have no issue with the current list of impermissible ideologies being replaced with Marxism, communism,socialism, and progressivism as impermissible.

Read a longer post on the topic over at Dr. Phi's page.

Posted by heresolong at 6:20 AM 1 comments

Email ThisBlogThis!Share to TwitterShare to FacebookShare to Pinterest
Labels: impermissible

Selling an electric motorcycle vest on Ebay.  Picked it up from a friend's widow who was getting rid of all her motorcycle stuff after her husband died.  Some stuff I could use myself, some stuff I'm putting on ebay, mostly I was doing her a favor.

However, I listed it on ebay; it didn't sell; and today I went to relist it.

Ebay: You have to enter the "outer shell material".

How the hell would I know?  There is a list of about forty possibilities including leather, polypropelyne, jute, satin, etc.  It's a freaking heated vest for a motorcycle.

Ebay: You have to choose a Department.

What the hell?  Why?  It's listed as a women's heated motorcycle vest and it's listed in the correct category for heated gear.

That isn't an option.  The choices are Men, Teens, and Unisex.  WTF.  So now it's listed in the Men's Department.

Ebay: There is a conflict with your title.  Your title says the item is New but your listed says it is used.  Please fix the conflict.

The company that made the vest was called NEW AGE MOTORCYCLE.  Gah!

Add to that the fact that they now want my bank account information because apparently they aren't going to be processing payments through Paypal anymore (which is weird because they own Paypal) and it's getting to the point where it is more effort than it is worth to  sell stuff on Ebay.  I have sold significant amounts of stuff through their service over the past twenty years (100% and over 500 positive feedbacks) so I'm not a newbie to this stuff, but if it's going to be this much trouble, maybe I'll just throw the stuff away.

Have you noticed that everything always gets more complicated?  Basic high speed internet browser then has to add the capability to process email and edit documents.  Boom!  Neither basic nor high speed.  Netscape Navigator did this.

Honda Civic becomes a luxury sedan  as they add a new feature here and there.

Ebay requires all sorts of extraneous information to sell your stuff and won't let you use the payment processor that they own and that they have been using for years.

Apps on your phone suddenly don't work the way they used to and you can't figure out why, because they "upgraded" them and someone thought it would be a good idea to move the search button from the top of the screen to a hidden menu.

Why don't companies leave well enough alone and recognize that making you product more complicated and harder to use sometimes isn't a good tradeoff for more unwanted features?

Update and on-topic: I regularly visit The Aviationist, over at https://theaviationist.com/.  He has interesting articles on various aviation topics.  I got the Top Gun: Maverick lego video from him and left a comment about how awesome it was yesterday.  I comment there semi-regularly but as far as I can tell I am one of the only commenters.  The most I've seen on any post is two or three so there isn't a lot of comment traffic (no idea how many people look at the site).  That being said, today I could not comment because the process has changed.  Used to be if you clicked "post as a guest" it would let you type in username and email, then he would moderate your comment.  Now clicking "post as a guest" asks you to sign in and verify your email.  I could understand a site that had lots of comments and lots of spam (hey Reason, your BS faux TDS libertarianism isn't the only problem with your site) but given that this doesn't seem to be the case, why on earth make it harder to leave comments.

Posted by heresolong at 6:07 AM 0 comments

Email ThisBlogThis!Share to TwitterShare to FacebookShare to Pinterest
Labels: ebay, overcomplicating your product right out of the market
Older Posts Home
Subscribe to: Posts (Atom)