Expanding my horizons I decided to try canning beets.  For background I've done pickles, applesauce, apple butter, apple jelly, apple pie filling, apple slices, pear slices, and jams of various sorts.  I also canned milk the other day just to see what would happen.  It is an experiment and I have no intention of drinking the milk, just wanted to see.  Six jars and I'll open them at three or four month intervals.  Not sure what then but I assume I'll be able to do a smell test without risking life or limb.

So back to beets.  Two pounds, looked like two or three quart jars. No problem. That seems like a reasonable amount for first try.   I have a pressure canner which beets require because they are low acid.  Off we go.

Step 1: lop off leaves, leaving about two inches of stem.

Step 2: Boil until cooked.  You know they are cooked when the skin starts to slide off

Step 5: Pack into hot jars and top with boiling water and a bit of canning salt

Step 6: Process in pressure canner for 35 minutes.  This step, since I have an old style canner, involves waiting until the seal valve closes, then adjusting the heat to keep steam from pouring out from under the weight.  Pretty easy but you do have to watch, otherwise you risk running the pot dry.

Once you are done you let them sit in the pot while the pressure drops, then remove, check the lid tightness, allow to cool. 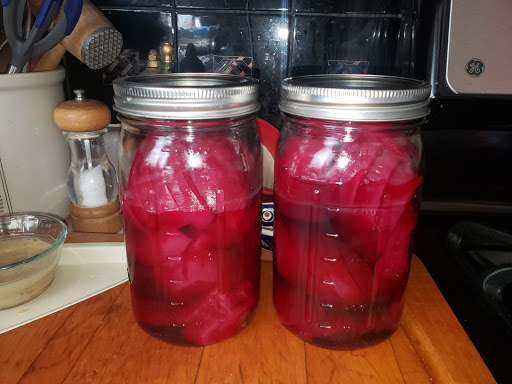 Here's where it got tricky.  As you can see the water level in the jars is nowhere close to the top.  The water in the pressure canner was a lovely shade of maroon.  This tells me that the water in the jars was being forced out of the jars while they were being pressure cooked.  This is not supposed to happen.  What is supposed to happen is that the jars and the air and the water all heat up together.  The air is forced past the lids at which point everything is the same temperature there should be no more matter transfer since the lids are basically sealed.  When you cool them off the inside of the jars reduce in pressure, pulling the lids tight, and the rubber seals are now thoroughly cooked to the glass.

Reviewing the combined wisdom of the internet I was told that I released the pressure too quickly (I didn't, I actually walked away after turning off the heat, leaving the pressure weight in place, and came back about an hour later), or that I took the jars out of the water too soon (I didn't think I did).  Given the amount of beet juice in the water I would say that this all had to have happened before I took them out so we can discount the second option.

I'm sure the beets themselves are fine and that I could eat them any time I wanted, but I'm equally sure that they aren't actually "canned beets" but rather "beets in a can".

Any useful advice from other canning types would be appreciated.

Addendum: I left out the plate on the bottom of the canner by accident.  Could this have created too much heat in the jar and thus overheated the contents, forcing out the juice before the water had heated up?

Posted by heresolong at 1:36 PM

Email ThisBlogThis!Share to TwitterShare to FacebookShare to Pinterest
Labels: adventures in canning, beets

Yes, the circulation under the jar's is all important. One time is all it take's for most of us. I would take the lid off and replace, refill, and re-can them. Other than maybe taking them out of the jar and vacuum sealing them I'd try with at least some of them.
Margi