Got up today, had no work scheduled, decided it was a good time to process some apples.  Sauce and cider. 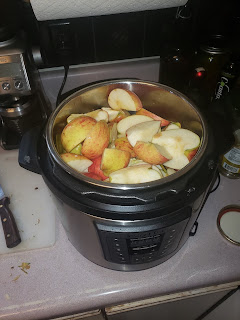 Using the Instant Pot for the first time to process the apples.  It's a bit smaller than my stock pot but it takes about 25 minutes to process a batch of apples including heat up, pressure cook, pressure relief, so there's that.  Also more efficient as I don't have to stir and it beeps at me when it's done. 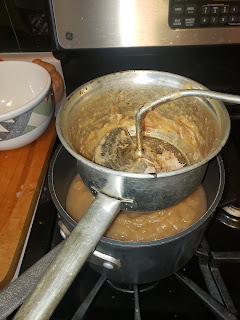 Step two, run the apples through my food mill.  If you peel and core them first you don't have to, you can just hit them for a few seconds with an immersion blender, but I don't spray my trees so they have to be mostly cut apart for appley goodness. 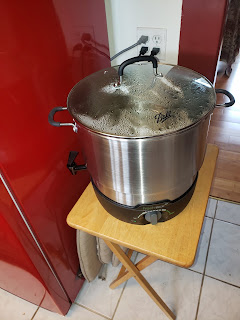 Step three, put into hot jars (first time I sterilized them in the oven. 20 minutes at 200 degrees. Important safety tip: put the jars in the oven cold before you fire it up so they don't crack). Then process 20 minutes in my new Ball Electric Water Bath Canner. Also first time using it but I like it a lot. Quicker to a boil than a pot on the stove, tidier as the big canning pot reflects a lot of heat to the stovetop, making a mess, and more convenient as it doesn't take up my stovetop. It holds up to 7 quart jars although I only had 5. 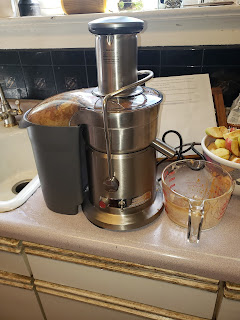 Breville Juicer.  Chop up apples, removing ugly bits and bruising.  I was actually a bit pickier with the cider than with the sauce.  Juicer creates a lot of foam so I fiddled around til I came up with a two step process.  First was to let the full container sit a bit so that the foam would rise and harden.  Scooped it off with a perforated ladle from my wok set.  Poured it into a small carboy and let it sit again, then poured it through a sieve and into the final carboy.  I have about a gallon and will need to pick up some yeast on Monday or Tuesday.  Meanwhile I figure it will be fine as it is fairly cool outside.
A bit of data: 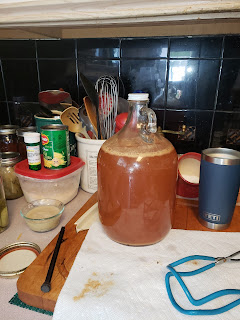 1 Lowe's bucket of apples from my Gravenstein tree made 5 quarts applesauce and 1 gallon cider
1 gallon cider about 45 apples (cut up with bits discarded)
5 quarts applesauce about 25 apples (ditto)
Total time with Instant Pot and Ball Water Bath Canner: 3 hours.  I was planning on more but I'm feeling a bit canned out.  Had to sort of wash everything in between batches so there was plenty to do and little down time.  Maybe during the week I could bang out another batch of applesauce.  Or another gallon of cider.  I'm worried about the cider not keeping unless I put yeast in it.  Would love to be able to do a little trading, just have to find someone who has canned other things and doesn't have an apple tree. (a rare bird around here).
Update: Google Blogger apparently can't maintain a link to a photo hosted on Google Drive so I had to download these photos from my drive, then upload them from my computer.
Complaint: Blogger doesn't want to consistently allow you to put images in line with text, that is why some of the descriptions above are inline and some are not.  Super annoying.  Not sure what happened to the editor.
Posted by heresolong at 2:08 PM

Also, stupid picture links are all broken. Followed Google's instructions to take pictures from my Google Drive using a sharing link and insert them into Google's Blogger. Showed up perfectly yesterday when I posted it, today they are gone. How can Google not be able to show Google's pictures? Grrr! I'll download and update them later.